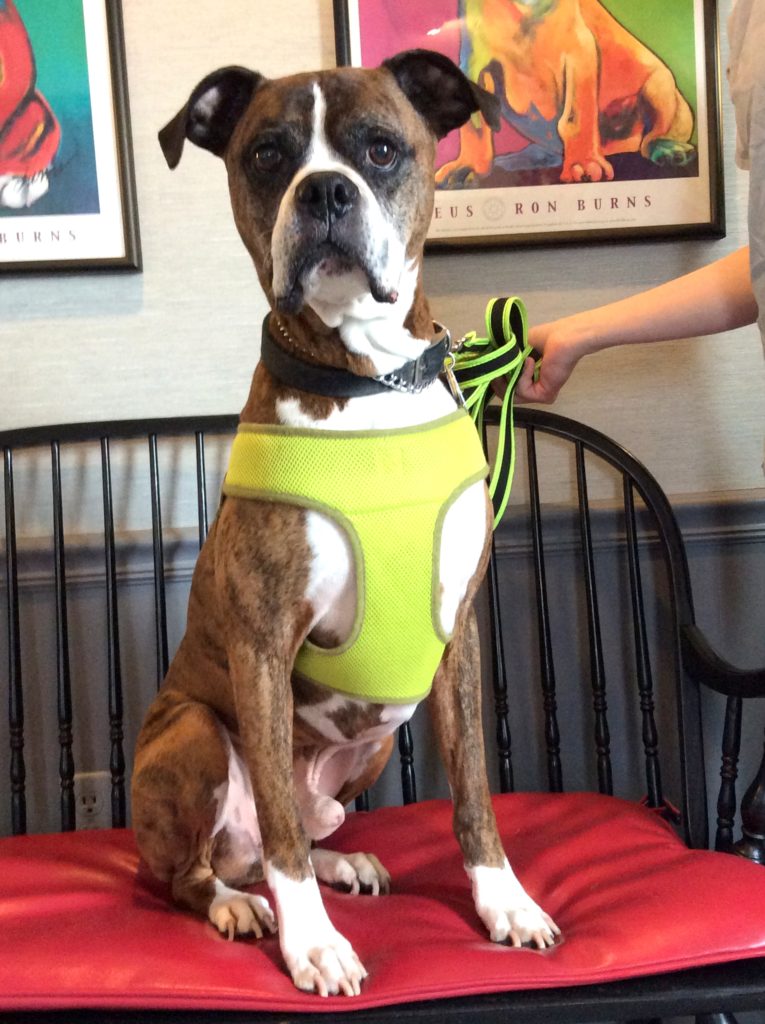 “A long time ago, I used to raise and show Siberian Huskies, German Shepherds and Dobermans.  I loved the look of these breeds, especially the Doberman.  If someone told me that I would come to love Boxers I would have thought them to be out of their mind!  However, things
Approximately ten years ago, I found a stray boxer who was about eight years old.  After searching for his owner and not finding one, I decided to keep him.    Unfortunately, he developed cancer and was not with me very long.  Rocky endeared me to the boxer breed and I knew my next dog would be another boxer.

Ben (who went by another name) was an owner surrender at the Ravenna Dog Pound.  He was supposed to be adopted by another individual who was a no show on the pick-up date.  I gladly adopted this not quite two-year-old and went straight to Hudson Veterinary Hospital for the rest of his shots on our way home.  Apparently he was meant to be mine.

Ben at age nine likes his beauty rest!  He likes to sleep and often one of my two cats will be curled up with him.  He enjoys riding in the car, walks, playing with his many toys in his toy box and especially his visits to Hudson Veterinary Hospital where he is thrilled to see everyone.  Boarding is never a problem for Ben.  He enjoys his ‘vacation’ there!

Ben’s favorite toy is his red Kong bone.  He likes dog biscuits but his favorite treat is a small amount of cheese.  Every morning, Ben expects a cheese cube in each end of his bone and he delights in playing with it.

He’s a great dog, a happy boy and I certainly enjoy his Peter Pan outlook on life!  Ben loves people, loves ‘his’ two pet cats and is up for making the most of his doggy life.”

Ben the Boxer has been a patient here at Hudson Veterinary Hospital for the past 8 years. He is a very sweet rescue pup who immediately became a staff favorite – both in the office and in the kennel where he enjoys his visits with us. He is outgoing, playful, and always happy. Because he is such a great pup who is always happy to see us, we welcome Ben as Hudson Veterinary Hospital’s Allstar Pet!