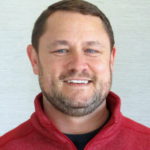 Ryan assumed the role of practice manager in January 2019 when he and his wife Dr. Kelly Willard became the owners of Hudson Veterinary Hospital. Ryan coordinates meetings and oversees paperwork and financial matters for the hospital. He and Dr. Willard have two young daughters and a rescue dog named Scarlet who is a black lab mix. Ryan was formerly a high school biology and anatomy teacher and has served as the girls’ soccer coach at Streetsboro High School since 2008. When he is not working or coaching, Ryan loves to play golf, softball, and soccer, and enjoys traveling with his family.